Chapter 27: Holding Against Darwin and Lincoln

In my last post, we learned about the division of Round Hill Baptist Church in the 1850’s. Part of the congregation “seceded” to build another church based on the concept of Open Communion which was contrary to the tenets of the original Baptist faith. Nobody fired a shot. Nobody died over a difference of opinion. Eventually these two congregations merged again. They needed the strength of the whole body of believers to meet the challenges ahead manifested by assaults on their biblical foundations and their freedom to choose. Very closely related to the reasons for the Revolutionary War. All wars? Lust for power?

The first and perhaps greatest erosion of their foundation started a world away and surreptitiously crept upon them. The second danger was closer, more obvious because it threatened their lives.

While the NC settlers in Nanney Town and Montford Cove in 1836 were focusing on feeding themselves and building communities centered around a common core, in Australia there was an expedition undertaken by a young man named Charles Darwin. Amid waterfalls, eucalyptus trees and golden cliffs, his contemplation of a duck-billed platypus were the seeds of an evolutionary war that whipped the scientific and religious worlds into a froth. He sent a specimen home to England to be studied.

Twenty-three years later, the results of his eleven-day adventure in the ancient forest of the Blue Mountains of New South Wales, On the Origin of Species, fractured the entire world. It was a shadowy danger to the ecumenical community until they made an effort to understand and address it.

Also twenty-three years later in the 1860 time frame, the Divided States of America faced a dark period when brother fought brother. Farm boys in their teens or early 20’s were bearing newly accurate rifles but fighting the same way Napoleon’s troops had, up close and personal. The carnage was horrific. Those who survived had to have been scarred emotionally. The bloodiest day of combat in U.S. history was at Antietam, according to an article in the January 2015 Smithsonian magazine by Tony Horwitz. “PTSD, The Civil War’s Hidden Legacy.” He relies on historian Lesley Gordon’s report, “In a later battle, almost all the men of the 16th (Connecticut regiment) were captured and sent to the notorious Confederate prison at Andersonville, S.C., where a third of them died from disease, exposure and starvation.”

Two Southern leaders approached the conflict with great misgivings but then contributed with heart and souls. (www.civilwar.org) In January of 1861, Robert E. Lee, head of the Northern Virginia Army, wrote “I can anticipate no greater calamity for the country than a dissolution of the Union. It would be an accumulation of all the evils we complain of, and I am willing to sacrifice everything but honor for its preservation. I hope, therefore, that all constitutional means will be exhausted before there is a resort to force. Succession is nothing but revolution.” Lee was a 25-year USArmy vet but he could not fight against “my birthplace, my home my children.” He refused the offer to lead the Union forces.

Likewise old “Stonewall” Jackson, who became a fierce cavalry leader for the Confederacy, wrote in February 1861 prior to a peace conference that failed in Washington D.C. “I am much gratified to see a strong Union feeling in my portion of the state.” These far western counties of the Commonwealth eventually broke away from Virginia to become West Virginia, independent of the Southern viewpoint. (They didn’t have any cotton plantations in the mountains.) Jackson excelled in the first skirmish at Manassas (the Union called it Bull Run) where the wealthy Washington elite arrived with picnic baskets to watch the contest like a sports match. They left in flight with a different attitude about war.

Regardless of the tipping point, wrath consumes usually reasonable men who then cannot converse without violence. No compromise possible. Somewhat childish, certainly foolish. It is one of the “seven deadly sins” addressed by faiths of all persuasion, a form of self indulgence in my humble opinion. When men with money came to their senses in 1861, they could afford to opt out of the ugly conflict by purchasing a substitute soldier. Not around here. In this neighborhood, men and boys were obligated to put words into action but they did so cautiously. North Carolina was the last state to secede from the Union. May 21, 1861.

This was after the first shots of the war had been fired at Ft. Sumpter, SC, in April, 1861.

The First Official Flag of the Confederacy was flown from 1861 to 1863. The circle of stars represented the original seven states who seceded from the Union. South Carolina in 1860, Mississippi on January 9, 1861, Florida on January 10, Alabama on January 11, Georgia on January 19, Louisiana on January 26, and Texas on February 1, 1861. 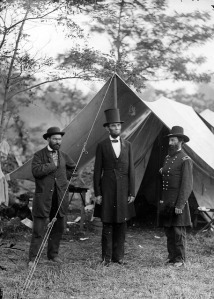 This country’s first Republican President, Abraham Lincoln, was at the helm of a listing ship, a solitary position that required his superior intelligence and judgment. As though he were specifically born and equipped for this task. He served from March of 1861 until he was assassinated in 1865. As a country we benefitted from the 1863 Emancipation Proclamation that his administration belatedly produced. We did not benefit from the bloody combat and aftermath.

In putting together this post, I was shocked to discover that my public school education didn’t mention that Lincoln may have been born in Rutherford County, North Carolina, the illegitimate son of Nancy Hanks and a prosperous mountaineer. I refer you to the article by Jean Gordon in the Daily Courier of March 2004, “Was the 16th President born in Rutherford County?” (Ironically she may be the same historian quoted in the Smithsonian and I didn’t realize that until just now–different research times.) She spotlights the authors Jerry A. Goodnight and Richard Eller who wrote The Tarheel Lincoln, North Carolina Origins of “Honest” Abe. Evidently there is an historical marker near the Bostic township giving credence to the possibility. Who knew? Happy birthday Abe whatever the origin: February 12, 1809.

I recommend reading about The Civil War Trust whose mission is the preservation of America’s Hallowed battlegrounds. Lest we forget. Kind of like Martin Luther King Day on January 19, 2015, and the 70th anniversary of Auschwitz on January 27, 2015. All representative of man’s inhumanity to man. And it ain’t over yet.

This entry was posted in Characters, Nanney Saga and tagged Abraham Lincoln, Charles Darwin, War of Brothers. Bookmark the permalink.

"There is nothing to writing. All you have to do is sit down at a typewriter - and bleed." Ernest Hemingway