Every community requires space to accommodate the gathering of a large group of neighbors. I have already mentioned that one of the first assemblies in Dysartsville grew out of the Muddy Creek Mission in the 1780’s, later becoming the Drucilla Presbyterian Church at Dysartsville. It was established close to where the First Baptist Church is located now, the corner of Club House Drive and Hiway 226. According to an old history found last year in the Dysartsville Community Club, today’s central meeting place on Club House Drive, the Dysartsville Baptist Church was organized May 2, 1857, with eleven charter members. It was located where their cemetery is now, on the hill across the street from today’s church. Clear as Muddy Creek???

From the same source, I learned that “Dysartsville was known as ‘Crossroads’ before a post office was established around the year 1850. The post office had its first location at the home of Mrs. Betsy Dysart.” (Her home was built on the property referred to in 1974 as the Elija Blankenship house.) “When Mr. Dysart built a store across the street from his house, the post office was moved to the store. A small school was located between the two churches at that corner. It consisted of two rooms, one of logs and one of planks.”

Not having a photo of any of these buildings, I have to use my imagination as to what they looked like. I am fairly confident that every gathering place had a piano or an organ. But how did they get one, and how much money was collected for this community acquisition? Last week, I was blessed to get a copy of a 1900 Sears, Roebuck and Company, Inc. Consumer Guide. (Catalogue #110). On the cover is the declaration: “This book tells just what your storekeeper at home pays for everything he buys and will prevent him from overcharging you on anything you buy from him.” ie, Advertising 101 is not a contemporary convention. The catalogue’s Musical Goods Department starts on page 230 with illustrations and photos of a variety of instruments and descriptions in tiny print. Really interesting–to me. 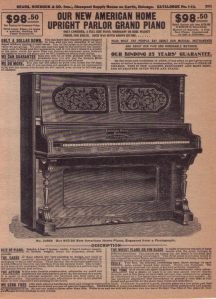 The first page of this department details the terms of purchase. Upon receipt of a $1.00 good faith down payment, purchases would be shipped for a thirty-day free trial if a banker issued a receipt of said money held for the trial period. Guaranteed full refund was promised if the consumer was not satisfied.

The second page has the details and a sketch.

“25 years binding guarantee accompanies every instrument during which time if any piece or part gives out by reason of defect in material or labor, we will replace it free of charge. With care, our instruments will last a lifetime.” European, Asian, or American goods no longer claim this. They can’t afford the promise of quality.

Of course, I got sidetracked on history and discovered that Richard W. Sears, a watch repairman, founded a watch company in Minneapolis, MN, in 1886. (I have to mention that my great grandfather, Julius Lehmann, was also a watch repairman at that same time but with the Swiss company Gruen in Minneapolis.) The following year, Sears moved his business to Chicago and hired Alvah C. Roebuck to repair watches, and my great grandpa lost out. The fledgling entrepreneur got the sterling idea to dabble in a mail-order business with catalog. He sold his business a couple years after that for investment cash.

In 1893, Sears, Roebuck, and Company was founded. Julius Rosenwald, a wealthy clothing merchandiser, bought out Roebuck and reorganized the mail-order business, helped immensely by the Rural Free Delivery Act of 1896. Their 1908 catalog proclaimed, “We solicit honest criticism more than orders.” In 1909 Rosenwald became president of the company and emphasized a range of merchandise at low prices to rural outlets. Sears taught America how to shop. The establishment of parcel-post system in 1913 streamlined delivery and expanded mail-order opportunities.

Between 1920 and 1943, Sears, Inc, owned Encyclopaedia Britannica, which they sold through their catalog. The first retail store was opened in Chicago in 1925.

A reference at https://www.smithsonianmag.com/history/rise-and-fall-sears-180964181/ states Sears was “not seriously challenged as America’s largest retailer until 1980s when Kmart Corporatiaon surpassed it in total sales. Walmart became the largest retailer in the world before the end of the 20th century.” And now there’s Amazon!

According to History of McDowell County by Mildred Fossett in 1976, page 82,”The Dysartsville School was an early Peabody School. The first teacher was Robert Logan, who built a little log school house near his home and taught the neighborhood children.”

Ironically, two Peabody schools are part of my life. In the 1850’s, Winona, Minnesota was on the frontier, and George Peabody Education Fund established the First State Normal School of MN in 1858, the first tax-funded school west of the Mississippi, and the first institution devoted to the education of new elementary school teachers. In 1860, the school closed for the Civil War 1862-1864, so the first graduating class was not until 1866. A hundred years later my big sister graduated from the school, then called Winona State Teacher’s College, which became a university in 1975. I was on that campus last summer visiting this little Mississippi River town where I spent my childhood.

And I have to mention that I graduated from the Peabody College for Teachers at Vanderbilt University in Nashville, TN. As an English major, not a teacher. Mystery author James Patterson did much better with his degree than I did. Maybe because he went back to New York, and I stayed in Nashville. Just kidding!

"There is nothing to writing. All you have to do is sit down at a typewriter - and bleed." Ernest Hemingway